In the EU 250 million pigs are killed every year, and 9 million of those are born in the UK. About the same number of pigs are slaughtered in the UK as not many living pigs are exported. Quite a lot of the meat is exported though, namely 300.000.000 tonnes of pork a year. However, even more pork is imported, 890.000.000 tonnes a year, so in total there is more pork entering than going out of the UK.

This is much different from for example the Netherlands, where 30 million piglets are born every year. Only 6 million of those are actually used to produce pork for Dutch people. About 10 million pigs are exported abroad (7 million as piglets, 3 million when they are ready for slaughter) and another 9 million are slaughtered in the Netherlands but their meat is exported abroad, mostly to EU countries. The remaining 5 million die before reaching the slaughter age of 6 months.

All over Europe, the number of pig farms has drastically gone done in the last few decades, while the number of pigs being raised has gone up. In the Netherlands in the 50s there were 270.000 pig farmers with on average 7 pigs each. In 2013 there were only 3.700 pig farms, and it’s estimated that in 2020 there will only be 1.600 left, with each on average having 6.000 pigs. It has become virtually impossible to be or remain a small-scale pig farm. 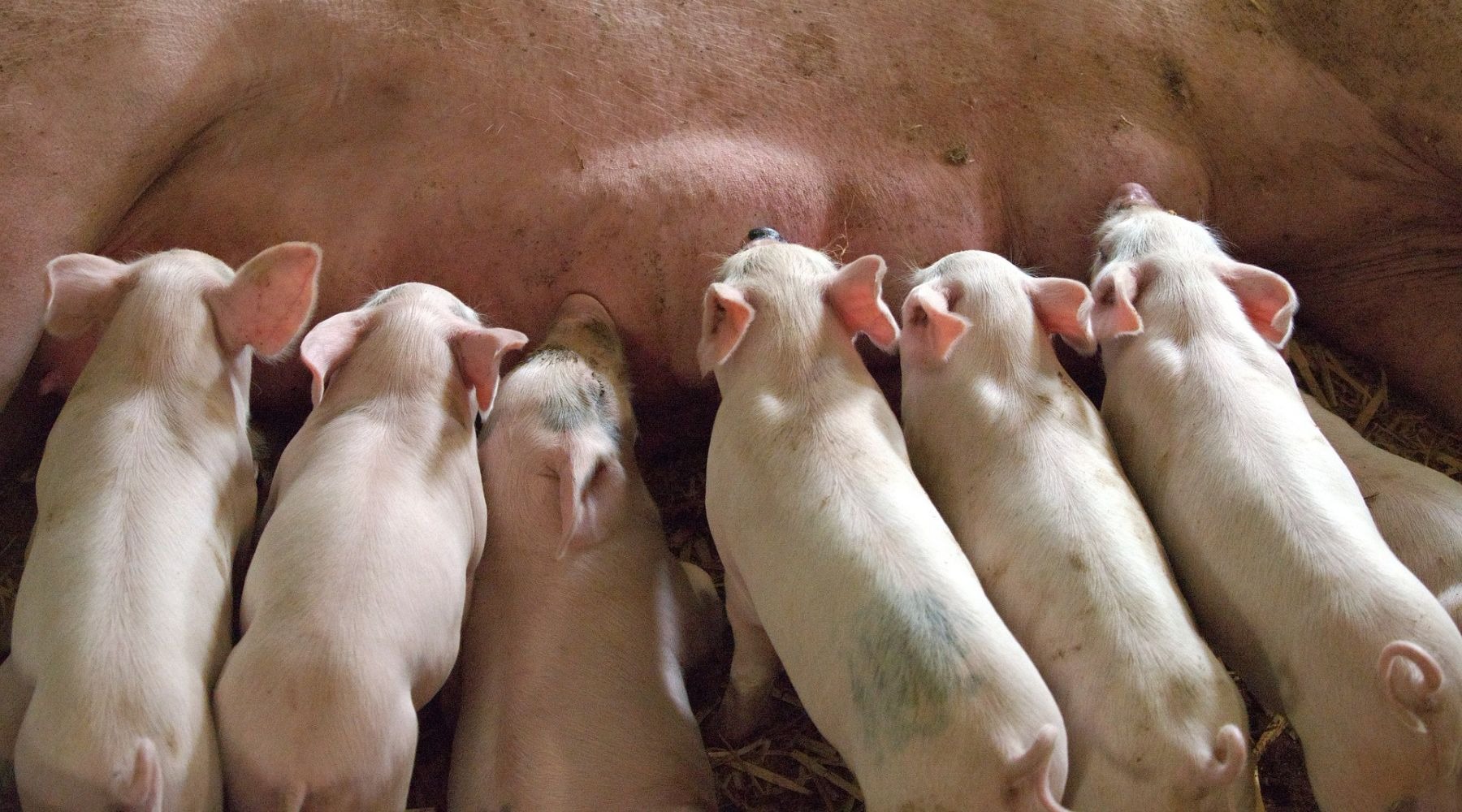 Sows are kept at seperate companies or at a seperate part of a pig farm to produce piglets. They are artificially inseminated 2 to 3 times a year, usually within a week after being seperated from their piglets. After a pregnancy of almost 4 months, the babies are born. For centuries pigs have been bred in such a way as to make sows give birth to more and more piglets. Not too long ago it was normal for a pig to get 8 piglets at a time, but nowadays many sows give birth to 15 to 20 piglets. Researchers are also working on genetically manipulating pigs so that in the future sows will be able to give birth to even more piglets. At the age of 5 sows are send to the slaughterhouse.

As sows are bred to give birth to as many piglets as possible, in recent years fertility problems among sows have become more common. Therefore, some farmers give their sows fertility hormones to increase the chance of a pregnancy or to influence their cycle so they can breed more timely and efficiently. For example, by using these hormones a farmer can make sure that all of his sows become pregnant at the same time. It is forbidden to give farm animals growth hormones in the EU for years now, as these hormones posed a risk to human health. However, fertility hormones are allowed and about 15 different types of hormones are used by farmers to make their pigs more fertile.

At the end of the pregnancy and after giving birth, 80 percent of sows in the UK are kept in farrowing crates. In a farrowing crate a sow can’t turn around or get up and can barely move at all. The goal of the farrowing crates are to keep the sows from accidently sitting on their piglets and killing them. However, under natural circumstances, this never happens and research has shown that there are other ways to prevent mothers from crushing their piglets, even when kept in unnatural small rooms. In addition, sows in farrowing crates experience a lot of stress and pain and can become aggressive as they are unable to move for weeks on end. They can even become aggressive towards their piglets, and one study showed that 1 in 8 piglets was fatally mauled by their own mothers.

Normally piglets are weaned for about 12 to 15 weeks, but in farms they are usually seperated from their mother after 3 to 4 weeks after birth. About 14 percent of piglets do not survive the first few weeks, partly because of preventable causes.

The life of a pig

For most of human history, pigs were mainly kept for their manure and meat was mostly just a by-product and especially useful in times of famine. Nowadays, pigs are primarily bred and kept for their meat and their manure is mostly an unwanted and inconvenient by-product. The life of a pig raised for this purpose is pretty bad. They spend their whole lives indoors (93 percent of pigs in the UK live indoors) and they don’t have the opportunity to play as they would naturally do. The average pig has between 0,3 and 1 square meter of space to live on. As there is little space they are usually forced to stand and sleep on a floor that is dirty from their own manure.

In addition, footage and research from animal rights organisations such as Viva! regularly show that animal abuse and neglect is very common in animal agriculture, also in pig farms. These include sick and wounded animals that are not getting treatment, dead animals just being left to rot between the living ones, extremely dirty facilities and lack of sufficient and clean water and food. 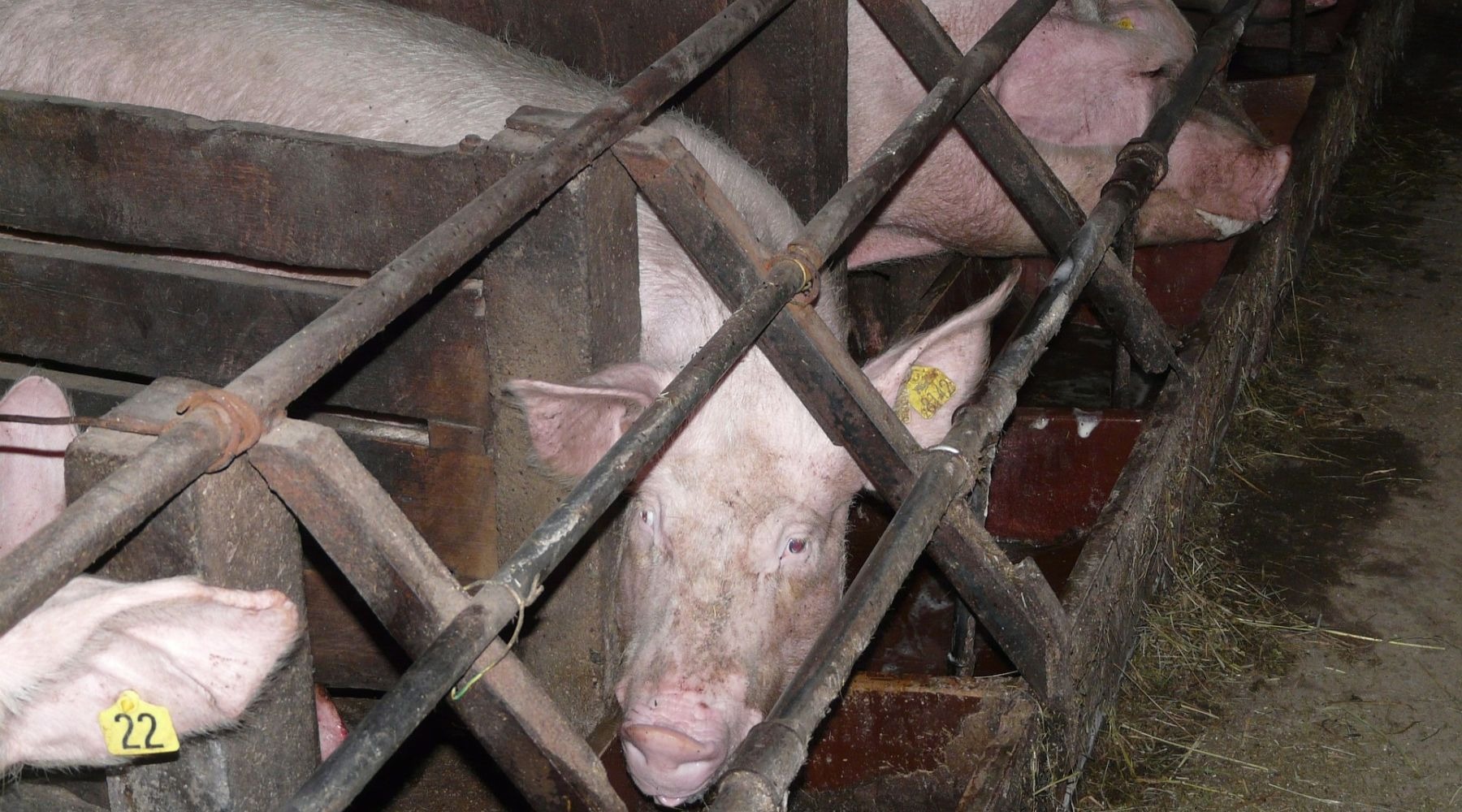 Because pigs live in a crowded room with nothing to do all day, of course they’re going to be bored. In a natural habitat, pigs are very playful and much smarter than dogs. No one will be surprised that dogs kept in a small room with nothing to do for weeks or months will likely get bored and wound each other. It should therefore not be a surprise that the more intelligent pigs do the same. One symptom of their boredom is that they start biting each other’s tails, causing wounds. To prevent this, most farmers dock their tails (80 percent of piglets in the UK and an even higher percentage in the Netherlands), usually without pain control. The tails are usually either cut off or burned off. While taildocking has been forbidden in the EU for about 25 years now, farmers can easily get away with doing it and it is widely known that this happens. The regulations specify that a farmer is allowed to continue tail docking if the farmer temporarily does not have any other way to prevent the pigs from biting each other’s tail. This was meant as a temporary measure, for example while a farmer is busy adjusting his facilities to incorporate more distractions for the pig to prevent tail biting. However, nowadays it is widely used as a permanent excuse to continue this practice while farmers aren’t willing to use alternatives. In addition, many farmers also clip the teeth of their piglets to prevent tail biting and other forms of injuries out of boredom.

I couldn’t find any specific information about this for the UK, but at least in the Netherlands stomach problems are a common problem in the pig industry. More than half of all the pigs in the Netherlands suffers from stomach problems, such as ulcers, bleedings and holes in the stomach, which sometimes even cause animals to die. The main cause of this is stress, which makes pigs eat less and then stomach acid can damage the stomach. Another important factor is bad, unnatural food. Most pig feed contains too little fiber, which is also bad for their stomach. This could easily be solved by giving them straw, which reduces stress (more distractions) and adds fiber to their diet, but most pigs live on bare floors without any straw. 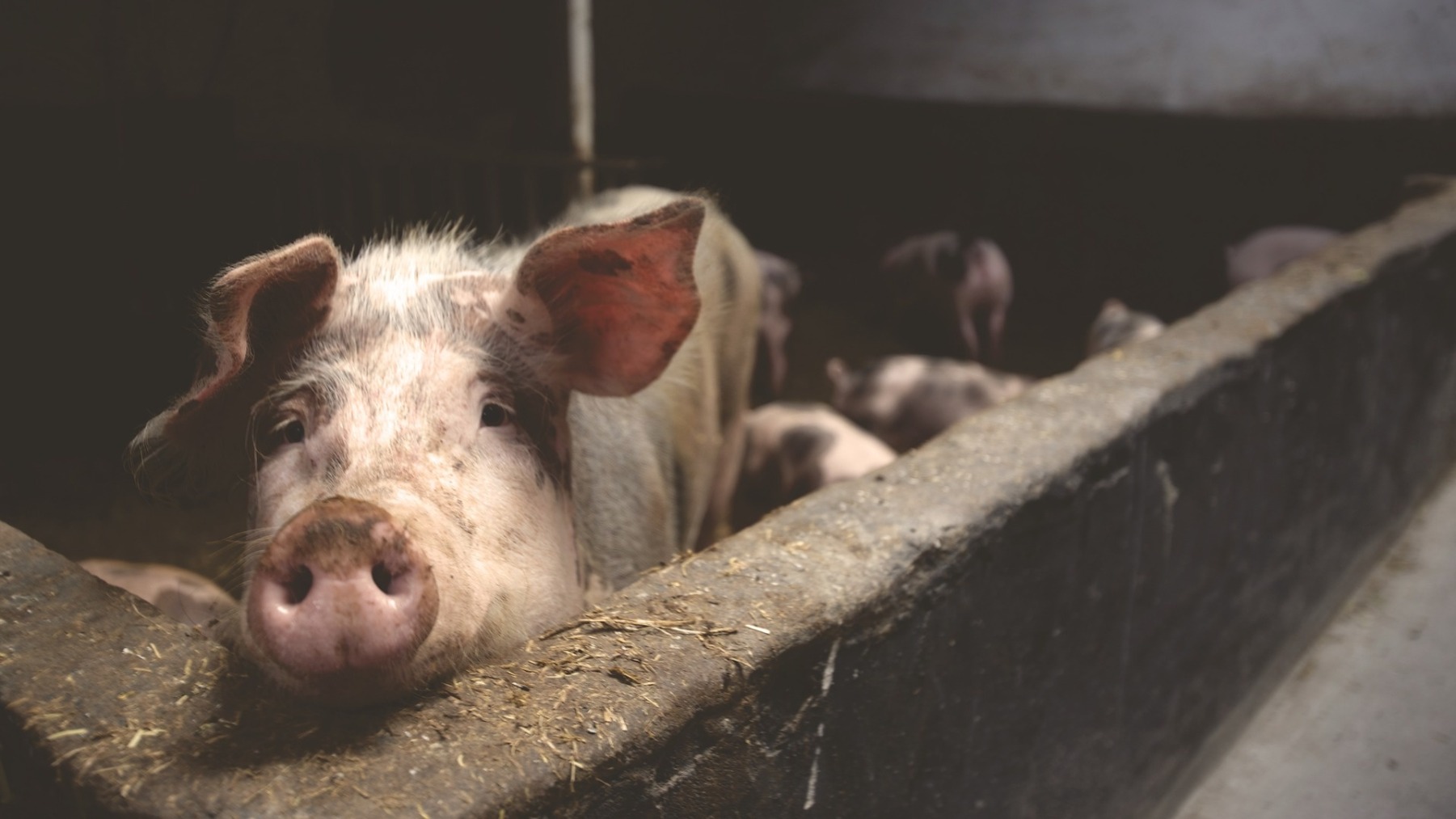 Normally pigs don’t poop where they play and eat and they can even quite easily be trained to do this at a specific place, just like with cats. However, in pig farms they have very little room, so they have to live in their own manure. This causes about half of all pigs to get respiratory problems. It also increases the chance of infection, especially on the legs and leads to higher antibiotics usage. In addition, the manure also often causes lung problems for farmers and people living near pig farms.

To improve the air quality in pig farms, many of them use air cleaners. These machines are made to filter ammonia and particulates from the air so that the environmental impact of pig farms is mitigated. Unfortunately, air cleaners only clean the air that is leaving the building, which means the animals are forced to live with a really bad air quality. Also, as the machines only work well in completely closed spaces, there often isn’t enough new fresh air coming in and when there is a technical malfunction, the pigs suffocate, as has happened at several farms. In addition, even with air cleaners pig farms pollute the environment as there are still many damaging particles that are not filtered out, such as methane and hydrogen sulfide.

At the age of 6 months, the pigs will be around 110 kilo and will be send to the slaughterhouse. For some pigs the transport will take quite a long time, as they might be send abroad to places where slaughter costs are less. Pigs are usually stunned with an electric shock or with CO2 gas. However, the gassing is known to be very painful and the electric shock doesn’t always work properly and often leaves the animal stunned but not unconscious and therefore able to feel. The slaughtering process is therefore definitely not painless or animal-friendly.

About 1.5 percent of pigs farms in the UK are organic pig farms. Unfortunately the situation in organic pig farms is not much different or better. Sows have to live in groups during pregnancy and are not allowed to get fertility hormones. Artificial insemination is still used though, and sows are kept in farrowing crates during and after birth. Castration is also allowed for organic pigs, but tail docking and teeth clipping isn’t. They have a bit more space (1.3 square meters for pigs between 85 and 110 kilo) and part of their stable has to be open so it can be ‘outside’ (although 75 percent of the outdoor part is allowed to have a roof and it doesn’t have to be big). The slaughtering process is exactly the same as with non-organic pigs and they are only allowed to live one month longer.

While some things might seem slightly better, organic pigs usually have more health problems, such as more respiratory disease, liver damage, parasites, a bigger chance of infections and a higher death rate for piglets. As there is no way to raise and kill pigs in an animal-friendly or environmentally-friendly way, the best thing to do is just to not consume products made from pigs.

Why leather is one of the most polluting and cruel products Why palm oil is bad, but boycotting it even worse