Where do animals for testing come from?

Most animals that are used for animal testing are specifically bred for this purpose. In the Netherlands, most animals for testing are bred by the research centers themselves (71 percent) while the rest are bred by special breeding farms or taken from the wild.

Research on wild animals can happen in two ways. Sometimes, research is done in their natural environment, while in other cases animals are taken away for research in laboratories. In 2015 about 10.000 animals were taken from the wild for experiments in Dutch laboratories, while more than 20.000 animals were studied and tested in their natural environment. On average, about 3 percent of animals for experiments in a laboratory were taken from the wild for this purpose.

Animals that are usually kept as pets, such as cats and dogs, are also used in tests. However, researchers aren’t allowed to use cats or dogs that have been kept as pets. When these animals are used, they’re specifically bred for this purpose. Sometimes it can happen that an animal becomes a pet after having been used in experiments. However, this doesn’t happen often, as most animals die during experiments or are killed afterwards so their insides can be studied. Dead pets are sometimes used for tests, but only when the owner has donated his/her pet for this purpose.

27 percent of animals that are used in tests are genetically modified animals. Mostly these are genetically modified mice. By using genetic modification, it’s possible to learn more about certain diseases and the link between a disease and certain genes. In addition, it’s often important to have a big group of animals that is genetically identical or to use genetic modification to create animals with specific diseases or who are more likely to develop a certain disease. This makes it easier to get enough animals with a certain disease to develop and test new treatments.

What species are used?

Tests on great apes are no longer allowed in the EU. Tests on endangered and protected species are also not allowed unless this is absolutely necessary and no other animals can be used instead. In this case, a special request can be granted to use these species.

Laws regarding animals for testing only apply to vertebrates, such as mammals, reptiles, amphibians, birds and fish. Invertebrates (with the exception of cephalopods) are not included. This means that invertebrates such as snails, worms and insects, can be used in experiments, but they’re not protected against unnecessary harm and researchers don’t need to follow the rules that do apply to vertebrates regarding humane treatment etc. These animals are also usually not counted in statistics of animal testing.

Another group of animals that aren’t counted for the statistics and aren’t protected by animal testing laws are unborn fetuses. When these are eventually born, the fetus is protected by law, but fetuses that are killed before they are born aren’t protected. This means that certain experiments that aren’t allowed on animals, can be performed on fetuses. Especially a lot of experiments with genetic modification are done using fetuses who are killed prematurely. For example, chicken fetuses are used to create Frankenstein-like creatures through genetic modification. As long as these animals are killed before they’re born, this is allowed.

Mice and rats are the most commonly used animals for testing, both in the Netherlands and worldwide. About 70 percent of animals used in the Netherlands are mice and rats. At special breeders, it’s possible to get hundreds of different types of mice and rats, including many genetically modified ones for specific purposes. These animals are mostly used for toxicity and safety tests and to produce antibodies. In addition, they’re used in pretty much all other types of scientific research where animals are used. All types of diseases can be given to mice and rats, from cancer, lung problems, Parkinsons and blood poisoning, to addiction, autism, broken bones and burn wounds. Mental and psychological problems can also be studied using mice and rats. In order to do that, the animals are isolated, traumatised, scared, prevented from sleeping or starved to get them into the desired state of mind. Then their behaviour and reaction to certain stimuli can be observed, sometimes combined with information from implanted electrodes.

Tests on great apes are only done outside of the EU now, for example in the US. In Europe, around ten thousand other primates are used in experiments, including a few hundred in the Netherlands. About 67 percent of tests on primates in Europe are done to test the safety of pharmaceutical products, for example if certain substances cause psychological problems, influence blood clotting or are damaging to pregnant women. 33 percent of primates are used in other tests to learn more about the body, such as brain research or to study certain diseases. A lot of primates are bought directly, or through traders, from China. As it’s known that in China primates are sometimes taken from the wild for this purpose, it can’t be guaranteed that some of the primates used for these tests actually came from the wild rather than being bred for animal testing.

A wide variety of rodents are used in experiments, especially rabbits, but also guinea pigs and hamsters. These animals are mostly used for toxicity and safety tests. As rabbits reproduce quickly, they’re often used to test the effect of new products on pregnant rabbits and their newborns. In addition, they’re also used to make antibodies. In order to do this, rabbits are injected with a certain disease and the antibodies that their bodies produce are taken from their blood to make medicines. Hamsters are used in a variety of studies about diseases, such as atherosclerosis and cholesterol related problems. To do this, hamsters are given a very unhealthy diet and are then killed after a few weeks so their organs can be examined. Another group of hamsters is given a normal diet and still killed after a few weeks so their organs can be compared to the unhealthy diet group. 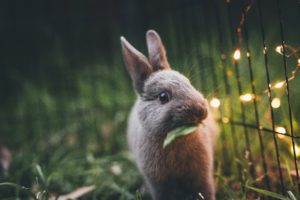 Dogs are used for toxicity and safety testing but also for studying certain diseases. Especially for research about cardiovascular disease and heart problems dogs are often used. For example, with surgery, heart problems are created by cutting off veins or implementing a pacemaker to influence the heartbeat.

Cats are also used in experiments. These are usually studies regarding movement or sensory tests. For example, surgery is used to damage the spine to see how this influences the movements of the limbs and in other studies ears or eyes are damaged or kittens are blindfolded from birth to see how this effects the brain. At the end of the study the cats are often killed to further study the brain.

Farm animals such as cows, horses, poultry, pigs, sheep and goats are also used in experiments. Part of these tests are meant to help increase the production of animal products, for example by researching animal diseases that occur on farms or by studying the effects of certain supplements, diets or the influence of specific genes that could help increase production.

These animals are also used for other purposes. For example, goats are used for the production of antibodies and for research regarding joints. To do this, the cartilage in joints is damaged to create an infection and to help them develop osteoarthritis. Then the goats are killed so the progress of this illness can be studied in detail. Sheep are also used for different types of research, such as studies for cardiovascular disease or blood poisoning. To study blood poisoning, feces is injected into the belly to create a bad infection, which causes the body to slowly stop functioning.

Pigs are mostly used for studying cardiovascular diseases and testing medical devices such as artificial heart valves. Pigs are also used in experiments with xenotransplantation, where organs or tissue are transplanted into other species. Nowadays, genetic modification is sometimes used to make pigs even more suitable for that. Up to now, there hasn’t been much success in xenotransplantation, as the bodies usually reject the tissue or organ from another species but researchers keep trying. The recipients of the donor material from pigs are usually primates. In addition, mini pigs are also used for research. These pigs were specifically bred in the 60s for animal testing, as these pigs require less space and are therefore cheaper and more practical to keep for experiments. Mini pigs are mostly used for toxicity and safety tests and sometimes also for other types of research.

In addition to the animals mentioned above, there are many more species that are used for animal testing, such as llamas, ferrets and other mammals, as well as many different species of fish, birds, reptilians and amphibians.

Click here for part 3 on the rules for animal testing.