Truffles are a type of fungi that grows on the roots of trees. There are many different types of truffles, such as black and white truffles, Chinese truffles, summer truffles and winter truffles. In the wild, they’re mostly eaten by squirrels and wild boar. Squirrels also play an important role in spreading truffles to new areas. There are two ways to get truffles: by finding them in the wild or by cultivating them on plantations. As the demand for truffles is quite high, truffles can be sold for a lot of money. Especially big, rare truffles are sometimes sold for tens of thousands of euros. Theoretically, truffles are vegan as they’re not animals. So are truffles vegan? As animals are usually used by people to find them, many people regard truffles as not vegan. 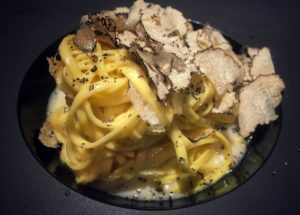 People have been looking for truffles in the wild for centuries. Unfortunately, they’re quite difficult to find as they grow underground. That is why dogs or hogs are used to find truffles.

With hogs, usually only the females are used. This is because the scent of truffles is apparently similar to the scent of male hogs. Therefore, it’s easier to make the females look for this scent. Nowadays, hogs aren’t used much anymore, because they often eat the truffles before humans can stop them, even though they’re usually held on a leash. In addition, it’s also more difficult to look after hogs and to transport them to potential truffle sites. Another downside of using hogs is that they often start digging, which can damage the mycelium in the soil. This is a part of the truffle that is not taken. When the mycelium is badly damaged, no new truffles can grow there. That is why the usage of hogs to find truffles was banned in Italy in 1985.

Nowadays, dogs are mostly used to find truffles, especially the Lagotto Romagnolo. These dogs are trained from a young age to find truffles and some are even send to special truffle training schools. It usually takes about 4 years to train a truffle dog and this costs a considerable amount of money. For most owners, this isn’t a problem as truffles can be sold for a lot of money so this money can be earned back easily. Dogs are usually allowed to walk around freely when looking for truffles as there’s no risk of them eating the truffles. Unfortunately, because of the high competition between truffle dogs and their owners, it regularly happens that truffle dogs are poisoned by competitors. 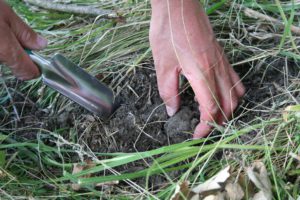 Truffles are only one part of a fungus. The fungus also has mycelium reaching further into the soil and often located around the roots of the tree. There, it looks for water and minerals in the ground and gives these to the tree. In return, the tree gives part of its sugar to the fungus. This way, these two species live together in symbiosis. Truffles can grow on a variety of different trees, but they have to compete with other types of fungi.

Truffles can be cultivated by planting suitable trees. To make sure that truffles win from other competing fungi, it’s important to make sure the soil is ideal for truffle growth,  by for example making sure it has the right acidity. When this is done well, truffles will gradually develop on the roots. It often takes about 7 to 10 years for the first truffles to be ready for harvest. The soil of the truffle plantation needs to be checked regularly and kept in ideal truffle conditions with irrigation and protection against animals like wild boar. When a plantation is managed well, new truffles can continue to grow for several decades.

The fact that truffles can be cultivated was first discovered at the beginning of the 19th century and started in France as ‘trufficulture’. This was first done by taking small saplings near truffle trees and moving them to plantations. Later it turned out that it’s also possible to just start with seeds. At the end of the 19th century there were already thousands of acres with trees for truffle cultivation. 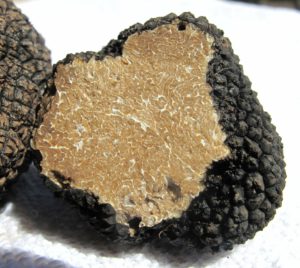 At the beginning of the 20th century a lot of truffle plantations stopped working because of the first and second world wars. In the last 30 years, new attempts have begun to start producing truffles on a large scale. According to Michel Courvoisier, director of the French federation of truffle cultivators, about 80 to 90 percent of all truffles in France come from truffle plantations. Truffle cultivation is also going on in many other countries, such as the United Kingdom, United States, Spain, Sweden, Italy, Chili and South Africa. Since the 90s truffle cultivation has also begun in Australia. In New Zealand the first plantations were set up at the beginning of the 21st century and they now number over a hundred. Unfortunately, there aren’t any statistics about how many truffles originate from truffle plantations worldwide. José Barbarin, manager of the biggest truffle plantation in the world estimated in 2006 that about 15 to 25 percent of all truffles come from plantations, but this has likely increased since then.

Unfortunately, dogs and hogs are also used at truffle plantations to find the exact location of the truffles and to find out whether the truffles have grown yet.

Human rights violations in the tea industry The rabbit industry