Research into developing lab-grown meat or so-called ‘cultured meat’ has been going on for quite some years now. The first lab-grown burger was developed in 2013 and several other types of lab-grown meat have been successfully made since. It is expected that the price of this type of meat will go down in the coming years and that it will become available at supermarkets for the same or lower prices as animal-grown meat. While research has shown that most people who eat meat are not open to trying lab-grown meat, it is not unlikely that it will become popular in the future. As it is exactly the same as animal-grown meat, there is not really any rational reason for person who eats meat to prefer animal-grown meat over the lab-grown version. Lab-grown meat is also a slightly misleading name, as in the future this meat will be produced in a factory, just like animal-grown meat, as it’s only grown in laboratories while it’s being developed. However, the question remains whether this is a positive development. In this blog we will discuss some of the pros and cons of lab-grown meat from a vegan perspective.

The biggest advantages of lab-grown meat are health-related. While public opinion suggests that many people believe lab-grown meat to be unhealthy, this is in fact not true and it’s considerably more healthy than animal-grown meat. Lab-grown meat consists of animal cells and is therefore exactly the same as an animal’s flesh and does not require any modification or other human interference other than providing a nutritious substance in which the cells can grow naturally. The only difference is that with lab-grown meat we can choose what part of an animal’s body we want to grow tissue of, therefore making it possible to only choose the healthiest parts of meat (without having lots of left-over meat with high levels of fat for example, as is the case when slaughtering an animal). In addition, the production of lab-grown meat does not require any antibiotics or other medicines, which helps to reduce the threat of antibiotic resistant bacteria. Lastly, lab-grown meat is much cleaner, as the threat of food contamination is much reduced. In the Netherlands research found that about half of all chicken meat contained poop bacteria and many pieces of meat were contaminated with other bacteria from unhygienic processing and diseases. With lab-grown meat these issues will no longer be concerns.

One study from 2011 concluded that: “In comparison to conventionally produced European meat, cultured meat involves approximately 7–45% lower energy use (only poultry has lower energy use), 78–96% lower GHG emissions, 99% lower land use, and 82–96% lower water use depending on the product compared. Despite high uncertainty, it is concluded that the overall environmental impacts of cultured meat production are substantially lower than those of conventionally produced meat.” (Tuomisto, Hanna L. et al. 2014)

However, the method of meat cultivation that this calculation was based on has not yet been put into practice. It is therefore not clear what the exact environmental impact is of the methods that are currently being used.

While much less animals are needed to make lab-grown meat, animals are still being used. Some animals used in the process are not necessary. For example, the famous burger made by Mosa Meats contained egg powder to improve its flavour, but this type of animal exploitation is not necessary. However, other animals and animal products are necessary in order to make lab-grown meat, namely stem cells and fetal serum. This means that while lab-grown meat has the potential to save lots of animal lives, it is by no means vegetarian or vegan and definitely not cruelty-free.

Lab-grown meat is made by letting cells from a living animal multiply and grow in a lab environment, creating bigger pieces of meat in the same way an animal’s body creates new cells and meat. In order to do this, it is necessary to have some stem cells from a living animal to start with. Through a biopsy these stem cells are taken from the animal and then put into a growth medium. Stem cells from one animal can provide huge amounts of meat, much more than that one animal’s body can produce. However, this type of production still requires a small supply of living animals. Professor Mark Post from Mosa Meat has stated that the production of cultured meats would still require keeping a limited number of animals and would still involve slaughter. Some researchers believe that it will become possible in the future to take one stem cell and create a self-renewing stem cell line. This would mean that we only need to do a biopsy and take a stem cell once and then won’t need animals for stem cells ever again. However, this technology has not been developed yet and it’s not certain this will become possible or when. 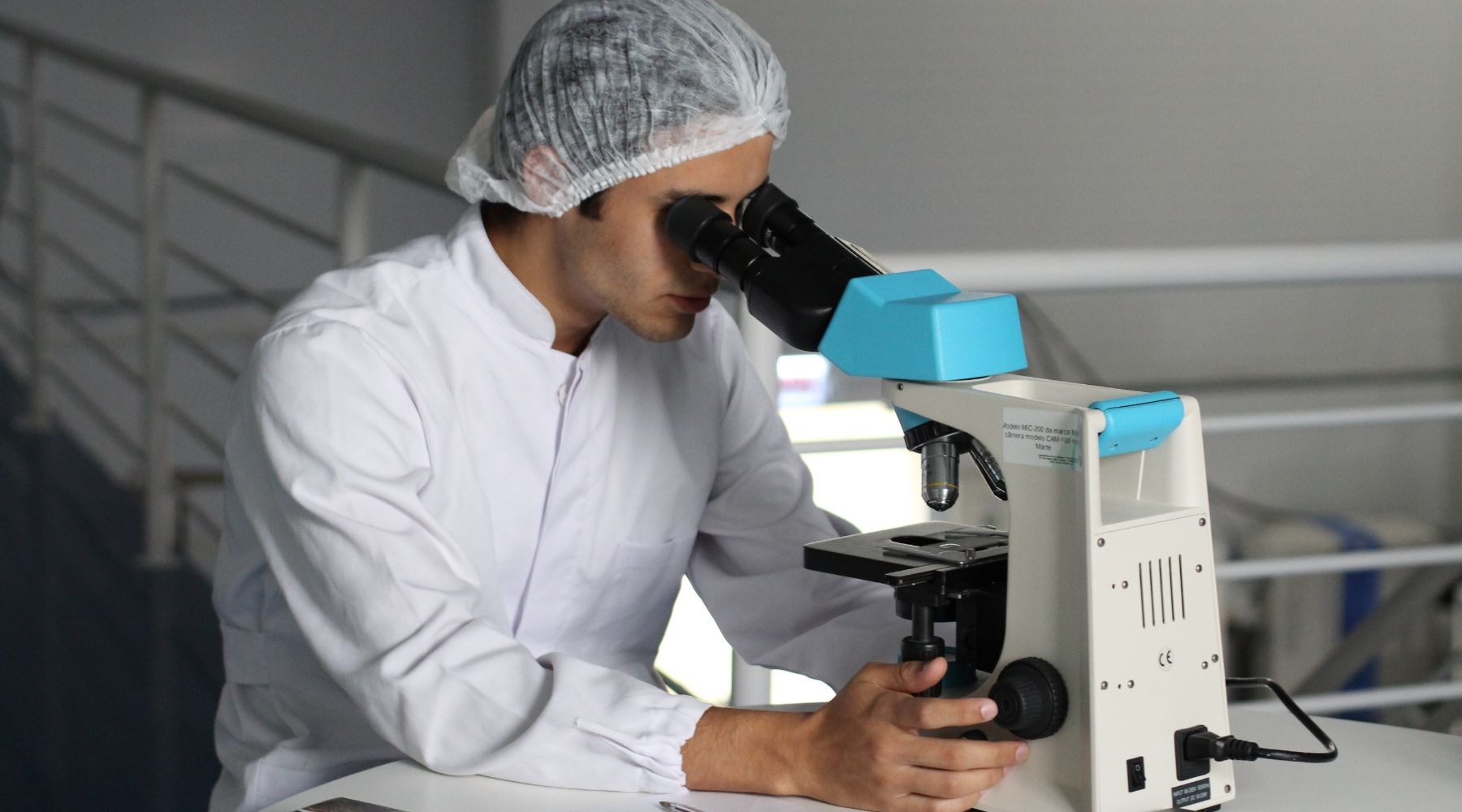 The most ethically problematic part of lab-grown meat is without doubt the use of fetal serum. After the stem cells are harvested, they need to be placed in a growth medium in order to grow. The requirements for a successful growth medium are quite strict as they need to be quite similar to the environment in an animal’s body, which means there are not many options available. Early experiments used an unspecified ‘animal broth’ as a growth serum. Nowadays all companies working on lab-grown meat are using fetal serum, mostly from cows and sometimes horses, as a growth medium. Hundreds of thousands of liters of fetal serum from different types of animals are already being used for all sorts experiments, including ones where cells are grown into bigger pieces of tissue.

Fetal serum is a substance that can be extracted from the blood of fetal calfs or the fetuses of other animals. While most companies who harvest fetal bovine serum are not open about the way they do this, the companies that have been transparent about their methods show how cruel and sickening the animal-industry is. When the pregnant cow is being slaughtered, the fetus is is quickly removed from the womb. Then the calf fetus receives an unanaesthesised cardiac puncture, which means a needle is stuck directly into its beating heart. The fetuses have to be at least 3 months old because else their heart is too small for this procedure. Through the cardiac puncture the calf can be bled to death as this blood will be needed to extract the fetal serum. However, it is important that the calf remains alive during this procedure which can take up to 35 minutes. While experts don’t agree on whether these fetal calfs suffer and feel this procedure and their slow death, it is clearly a cruel and disgusting procedure.

Nowadays about 1 to 2 million fetuses are killed this way every year to harvest fetal serum. If lab-grown meat becomes widely available and is grown using fetal serum, this would likely mean that many more fetuses will suffer this fate. While all producers of lab-grown meat are still working with fetal bovine serum at the moment, several of them have acknowledged that this is a problem and the company Hampton Creek announced in 2017 that it plans to create lab-grown meat on a purely plant-based growth medium. There has been some success in using plant-based growth mediums for certain experiments, so this is hopeful. However, many people are still sceptical about whether and when plant-based growth mediums suitable for cultivating cultured meat will become available and used.

So what if in the future the ethical problems with lab-grown meat are solved? What if self-renewing stem cells and a plant-based growth medium are used? Personally we still wouldn’t eat this lab-grown meat as we don’t miss or crave meat and it is likely still more polluting than a plant-based diet. A possible problem could be that animals will still be exploited for other animal products such as milk, eggs and leather. However, recent developments in this area suggest that soon we won’t need animals for these products either, as animal milk without the use of animals has already been made (by using yeast) and new leather alternatives are being developed rapidly. Another concern some vegans have is that this type of lab-grown meat would still be based on carnism as it doesn’t change the view that animals can be used and exploited and that meat is something we should eat. While this is a valid point, vegan lab-meat is still something that should be encouraged. While an entirely vegan world would be better for both animals, health and the environment, it is unlikely every human being on earth is going to go vegan soon. Therefore, if vegan lab-grown meat can be developed and save billions and billions of animals, we believe that is something to be encouraged.

What is shellac? Animal cruelty in Dutch animal agriculture and why this also concerns people outside the Netherlands