The problem with the dairy industry

There are about 1.8 million dairy cows living in the UK, each producing around 8000 liters of milk every year. The life of a dairy cow isn’t easy, as they need to work extremely hard to produce so much milk. On top of that, the dairy industry causes all sorts of suffering for these cows. Dairy is also very bad for the environment. In this blog we discuss the details of the suffering behind dairy production.

In addition, the usage of fertility hormones also increases efficiency, as a farmer can choose more precisely when he wants his cows to become pregnant and he can more easily make sure that a whole group of cows becomes pregnant at exactly the same time, making the milking more efficient. A veterinary organisation and several animal welfare organisations in the Netherlands have voiced concerns about the increasing usage, as there are few rules and barely any oversight in the EU regarding the usage of these hormones.

Almost all dairy cows are impregnated with artificial insemination. Special bulls are kept at special farms in order to produce sperm for this purpose. Young bulls at these farms are often encouraged to rape each other to practise their main task in life. When they are a bit older, sometimes a fake cow is used, but sometimes they are still forced to rape each other and the sperm from the other bull’s anus is used to send to dairy farms to impregnate the cows there.

After a pregnancy of 9 months, the calves are born. They are almost always separated from their mothers on the first day of their lives. Nowadays cows give an unnaturally large amount of milk, which means they could feed their calves and most of the milk would still be left for human consumption. However, almost all farmers take the dairy calves away on the first day, so there is even more milk to sell. Under natural circumstances, calves stay with their mothers for at least the first 8 to 9 months of their lives. Therefore, it is not surprising that both cows and calves react to this separation. Cows often become aggressive and try to follow their calves if they get the chance. They also call for their calves for days or weeks on end and show signs of stress. Of course that is not very surprising, considering they carry their children for 9 months just like humans do, with many of the same hormones causing a bond and mother feelings.

Female calves are raised to become dairy calves themselves. Male calves are raised to become veal. Almost all calves (male and female) are dehorned at a young age. This is done to prevent them hurting each other in the small stables in which they are kept. This is usually done with anaesthesia but this only helps for a limited amount of time which means that calves often still suffer for several days after this procedure. 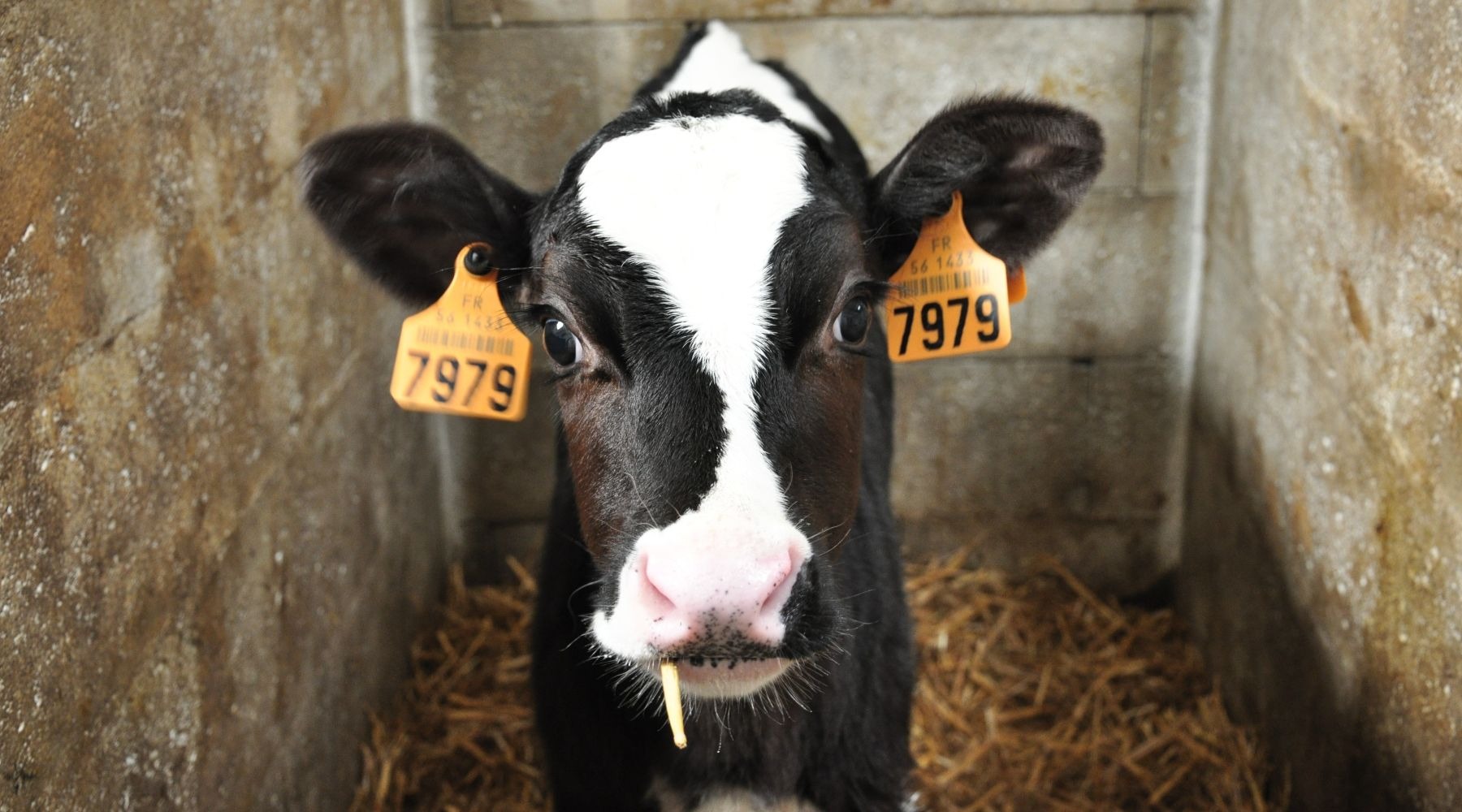 2 million calves are born in the UK every year. About half of those are male and they are mostly raised for veal. Some calves are also exported to the EU, about 11.000 in 2011. For the first eight weeks calves are kept in individual crates. This is mostly done to prevent them from sucking the urine from other calves, as they look for something to suck in the absence of their mum. After that they are housed in groups with little space, where they are kept for a few months. In most of the EU, such as in the Netherlands, the calves get an iron deficient diet to give them anaemia, as this gives the veal a white colour. In the UK, most calves are raised for rose veal and get a slightly more normal diet. Most calves never get a chance to go outside and restricting their movement in small stables supposedly increases the quality of the veal. Calves are often kept for veal as they have been bred specifically for high milk production. These male calves don’t grow as fast or become as unnaturally big and fat as calves bred for meat production. Therefore, the quality and quantity of their meat makes raising them until adulthood wouldn’t be as profitable.

Unfortunately, the veal industry is highly subsidized by the EU, adding another reason to kill the calves when they are young. Research in the Netherlands showed that 80 percent of the income of farmers who kept calves for veal came from EU subsidies.

About a century ago, the average dairy cow produced 2500 kilos of milk every year. Nowadays, the average is 8000 kilo, more than 3 times as much. This amount is still increasing and there are even cows that already produce 16.000 kilos of milk per year. At organic dairy production, the average is 7300 kilo, but there are also organic dairy cows giving 11.000 kilos per year. It shouldn’t be surprising that this is extremely hard work for the cows and they need a lot of food to be able to do this. Their body has to work so hard that they are exhausted all day long. Producing 8000 kilos of milk every year for a cow requires about as much energy as it would be for a human to run for 8 hours every single day. It should therefore not be surprising that this often leads to health problems. According to the European Food Safety Authority (EFSA), the fact that dairy cows are bred selectively to continue increasing the milk production is an important cause of their suffering. This often leads to lameness, mastitis and digestive problems because of the unnatural food. In addition, cows are often kept in small crates or stables, which according to the EFSA also contributes to their suffering.

In the UK, 20 percent of all dairy cows never get the chance to go outside. In the Netherlands this is even 35 percent. The majority of cows do get to go outside, but there are big differences between farms in how often and how long they are allowed to go outside. For their welfare, it’s better for cows to spend time outdoors. This gives them much more space and the opportunity to follow their instincts by grazing. In addition, cows that spend time outdoors have less chance to get common health problems such as mastitis, lameness and other leg problems. 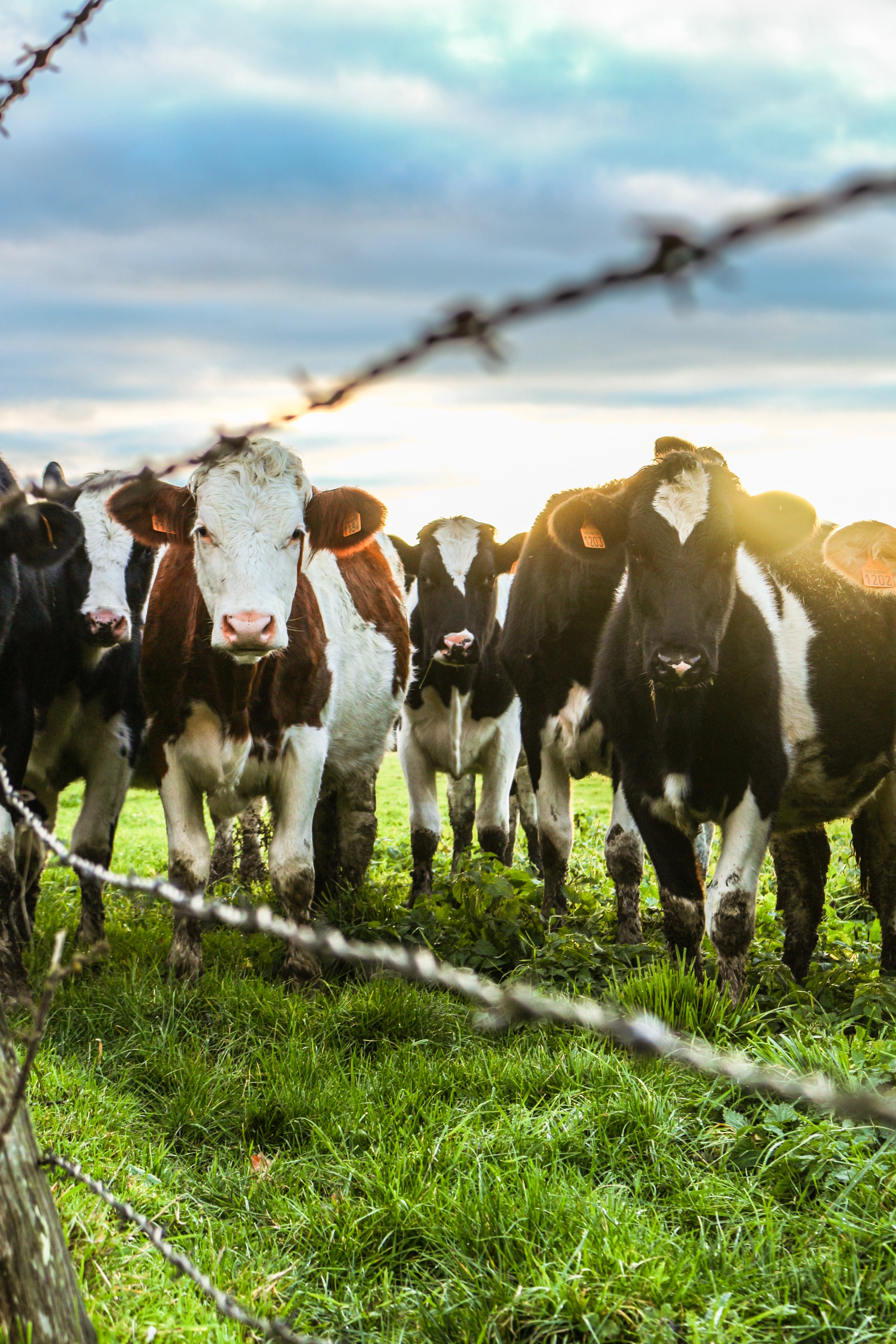 Normally, cows can easily become 20 years old. In the dairy industry, their productivity decreases after a few years because they are utterly exhausted and their body is worn out. People who would run 8 hours a day every single day also wouldn’t last long without ever having a rest. Therefore, most dairy cows are sent to the slaughterhouse when they are about 5 years old. Other reasons to send dairy cows to the slaughterhouse around this age or even earlier are because of infertility, lameness or mastitis. Organic cows are usually allowed to live about one year longer, but then they end up at the same slaughterhouses as the non-organic cows. Cows are often stunned by shooting a metal pin into their heads. Calves are stunned with this method as well or sometimes by using electric shocks. Unfortunately, this isn’t always done properly which means sometimes cows get their throat slashed and bleed to death without having been stunned.

Dairy is also very bad for the environment. Cows contribute significantly to the emission of greenhouse gases. Because of this, every liter of milk causes the emission of 1,2 kg CO2-eq. For soy milk this is only half, 0,6 kg CO2-eq. Cheese is even worse for the environment, namely 8,9 kg CO2-eq per kilogram of cheese. Worldwide, the production of dairy products is even responsible for 4 percent of all greenhouse gas emissions.

Furthermore, the production of dairy requires a lot of water. 1050 liters of water are needed to make 1 liter of milk. In order to make one liter of soy milk, only 297 liters of water are needed. One kilogram of cheese even requires 10,500 liter of water. As there is already water scarcity in almost two thirds of the world, this is not only bad for the environment, but also contributes to human suffering.

Another problem with milk production is that it requires a lot of land. Not just land to raise cows on, but also to produce animal feed. While some cows spend time outdoors, they will still get fed special food as well. A dairy cow eats around 70 kilos of feed every day. To make 1 liter of milk requires 0,9 m2 of land to produce animal feed, and for cheese this is 7,1 m2. Part of this feed comes from abroad, such as soy from South America. In addition, fields are used to produce grass. This means there is less land left for other purposes, such as giving more land back to nature. Furthermore, fertilizer is often used on these fields which contributes to extra greenhouse gas emissions and water pollution.

Unfortunately, organic milk and milk with other certifications are also really bad for the environment and still cause a lot of animal suffering. With these kinds of dairy, the calf is still taken away immediately after birth and cows are still forced to produce an unnatural amount of milk before being sent to the slaughterhouse at a young age.

In addition, dairy is sometimes also made from goat or sheep milk. Unfortunately, the animal suffering that this causes is usually even worse than with the production of cow’s milk. (We’re planning to make a separate blog about this soon).

Luckily it’s possible to live more environmentally and animal friendly without having to miss dairy products. Nowadays there are many different types of plant-based milks (such as soy milk, oat milk, almond milk, spelt milk, rice milk and coconut milk). In addition, there are also many different types of plant-based butter and plant-based cheese and the number of these products is only increasing. This way you can still eat a sandwich with butter and cheese or drink a glass of milk without animals needing to suffer for it.

The cost of coffee Why is vitamin D so important?