Every year about 330 million rabbits are killed in the EU for meat. It’s unknown how many rabbits are reared in the UK for this purpose, but the last statistics from 2009 show that between 2000 and 3000 tonnes of rabbit meat were produced that year. While the rabbit industry in the UK is not that big compared to other European countries, the UK also imports rabbit meat from other countries.

Some of the rabbits are kept specifically for breeding. The females are artificially inseminated for the first time when they’re about 15 weeks old. After a month, their babies are born, usually about nine of them. Unfortunately there are no suitable nesting materials in the cages, as the rabbits are born in bare wire cages. After 10 to 12 days, the mother is artificially inseminated again. These rabbits live longer than their children, but as they’re locked up in wire cages all the time, they often get health problems. Wounds on their feet and mammary gland infections are common. Quite soon their health deteriorates and they also begin to give birth to less babies at a time. Therefore, these breeding rabbits are usually send to the slaughterhouse after about a year. 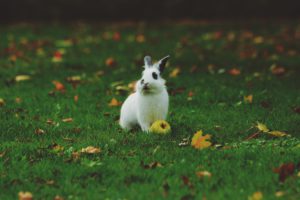 Life in a cage

Sadly, there are no European regulations for housing of rabbits. This means that their situation is often even worse than that of other animals kept for meat. Especially meat from France, Southern Europe or outside the EU is often from animals reared in horrific conditions. In some countries like the Netherlands, slightly better cages are used. These cages are still made from wire and are completely bare. The animals can sit up straight in these cages, but they barely have any room to move. Baby rabbits stay with their mom for the first 4 to 5 weeks and are then placed in other wire cages, where they have about one A4 paper of space. The wire from the cages often causes wounds on their feet and because they live so close together, the chance of illnesses is big. And of course, the conditions in other countries with less ‘luxurious’ facilities are unfortunately even worse.

Rabbits are usually slaughtered when they’re about 10 to 12 weeks old. About 20 percent of the rabbits dies before reaching the slaughter age. It differs at individual companies companies how many die exactly, but in most companies in Europe, it’s between 12 and 30 percent. The deaths are often caused by a combination of illness and stress, both caused by the unnatural and unsuitable conditions in which they’re kept.

Many rabbits have wounds because of the wire cages and have respiratory problems. Rabbits also have a relatively weak stomach and intestines, so digestive problems are also common. When these occur, rabbits often die within 24 hours. As there are usually thousands or tens of thousands of rabbits at one farm, it’s impossible to notice sick rabbits in time and it’s not unusual to find dead rabbits that have been laying between living ones for quite a while.

In addition, they also have to endure a lot of stress because they live so close to each other and have nothing to do all day. Therefore, it’s not surprising they often show signs of disturbing behavior such as shaking their heads, continuously turning around, biting the wire and harming themselves or others. They’re often very scared as well. That’s why rabbit farmers often keep a radio on 24/7, but even with these sounds they’re often very stressed and scared. Another problem in this sector is that rabbits are often lifted by their ears when they’re moved. Their ears are very sensitive so this is definitely not an animal friendly or harmless way to pick them up. 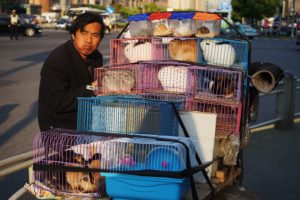 When they’re being moved to the slaughterhouse, rabbits are put in the same crates that are also used for chickens. In many cases they’re moved to a slaughterhouse abroad, as countries like the United Kingdom and the Netherlands don’t have any slaughterhouses for rabbits. Unfortunately, there are not many rules for the transport of live rabbits abroad, so they’re often stuck in the crates for long periods of time without any water or food. At the slaughterhouse, they’re first stunned with an electric shock, before they get their throat cut so they bleed to death.

Rabbits are also hunted for their meat or just for fun. It is not known how many rabbits are killed by hunters every year in the UK, but it’s probably hundreds of thousands. Hunters can use guns to kill rabbits, but some hunters also put nets in front of the rabbit holes and let a ferret chase the rabbits out of there. Hunting rabbits is allowed year round and the same goes for many other European countries.

Are truffles vegan? Animal testing part 1: What are animals used for?