Turkeys: the cruelty behind Christmas dinner

Christmas is a special time of the year for many people around the world. Even if the holiday has no religious meaning for some, families use the time to get together to share food and gifts and enjoy each other’s company. Unfortunately – and rather obviously – Christmas isn’t such a festive occasion for turkeys. Around this time of year, ‘seasonal slaughterhouses’ are used as the demand for turkeys increases, with over 10 million turkeys in the UK being killed in the run-up to Christmas alone. With Christmas on the horizon, we’ll look at the short and cruel lives these victims endure before ending up as a holiday centrepiece.

Turkeys are intelligent animals, evidenced by the fact that they can recognize each other by their voices, and more than 20 unique vocalizations have been identified in wild turkeys. They enjoy having their feathers stroked and are known to chirp along to music. Turkeys are also able to memorise an area of over 1000 acres and wild turkeys often travel far as they have a curious nature. Much like chickens, turkeys living in the wild enjoy building nests, raising their young and foraging. They also take dust baths (rolling around in sand) to maintain healthy feathers and skin. When given the chance, they can fly up to 55 miles an hour and are able to run at 18 miles an hour! It’s not surprising then, that one of the Founding Fathers of the United States, Benjamin Franklin praised the bird for its respectability and called it ‘a Bird of Courage’.

In the wild, turkeys can live up to 10 years, but on factory farms, they are usually slaughtered at between 9 and 21 weeks old. Baby turkeys (poults) are hatched in large incubators. Once hatched, they naturally look for their mother but find only scores of other poults huddled around a heat lamp to warm themselves. They’re then thrown on to conveyor belts to be separated completely from their shells, which often causes injury. Injured poults, just like chicks, are tossed into macerators, gassed or simply have their knecks dislocated. Any poults deemed to be too small or sick suffer the same fate. At around 5 days old, they’ll meet workers who hold their faces to a ‘beak-cutting’ machine. Just as with chickens, this is a process done with either an infrared beam or a hot blade. This is, of course, excruciating for the bird, and studies on de-beaked chickens have shown pain to be prolonged and perhaps indefinite (for more information on debeaking, see our blog on the egg industry). While debeaking is forbidden in a lot of countries (including the Netherlands since 1996), it’s often still done and allowed as the poultry industry claims it has not found any alternative solution yet.

Toe-cutting is also a necessary procedure, and it’s done primarily to avoid damage inflicted on other turkeys. This has to be carried out within the first 3 days of a turkey’s life, otherwise a veterinary surgeon must perform it. Stags are also often de-snooded to reduce the chance of cannibalism. The snood is the skin that runs from the bird’s beak to its chest and is used to attract mates. All of these cruel, standard procedures are done without any pain relievers.

Turkeys have been bred to be as large as possible. In 1970, the average turkey raised for meat weighed 17 pounds (8kg). Today, he or she weighs 28 pounds (13kg). Because of this, it’s often impossible for them to mate, so instead the industry resorts to artificial insemination. This involves the male breeder turkeys being ‘milked’ for their semen. The semen is then injected by means of tube or syringe into the female turkeys. 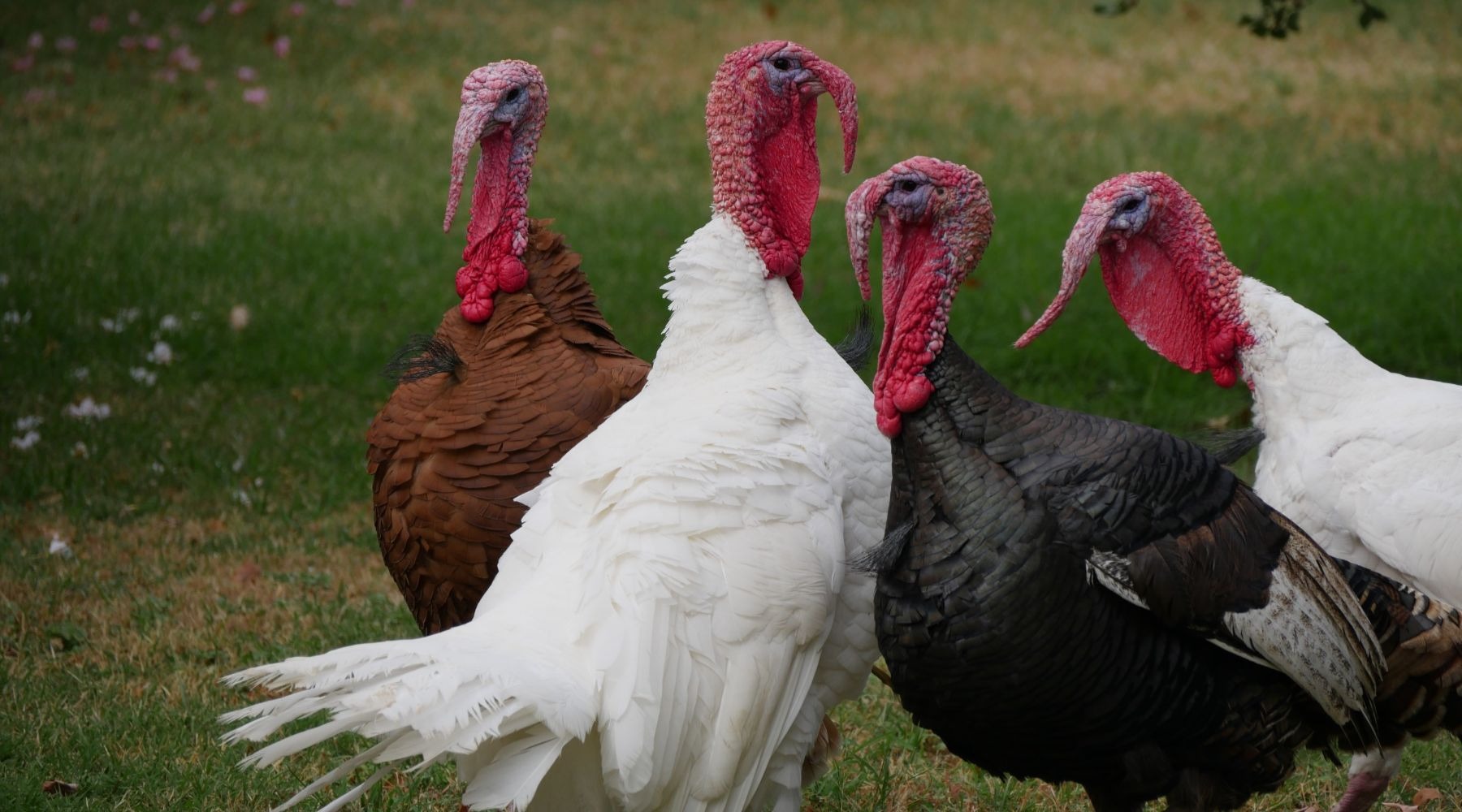 The life of a turkey

Most turkeys spend their lives in windowless sheds that can contain up to 25,000 birds. A minimum of 8 hours of artificial light is allowed each day, while the heating and ventilation are also automatically controlled. The stocking density for broiler-type housing of turkeys is usually 3 to 5 birds per square meter. Usually, the birds are housed on wood shavings, which quickly becomes covered in faeces, and as turkeys don’t scratch around in the litter as chickens do, the condition of the litter deteriorates much faster. Many birds die from their dire living conditions long before slaughter, especially young birds known as ‘starve-outs’, who either refuse to eat due to the stressful environment or simply can’t find their way to food and water points.

Turkeys that are reared in pole barns have more space than the turkeys in broiler-type housing. Despite having natural lighting and ventilation, pole barns often aren’t purposely built for housing birds, so the sheds can have many problems, such as bad ventilation and draughts. As the space for the birds is still extremely small, the overcrowding results in fighting and cannibalism. In free-range systems, turkeys fare much better with regards to space, with 10m2 per bird.

As turkeys are required to put on an extraordinary amount of weight to increase their market price, they often suffer from lameness. Turkeys are fed high nutrient feed to rapidly increase their growth which means that many birds can’t support their own weight. Having such large bodies results in infections in leg and hip joints which causes chronic leg pain. Lameness is also caused by ulcerations on their feet from on the damp, dirty litter. In addition, the high nutrient feed almost always causes severe intestinal problems. Antibiotics are usually used to mitigate this problem, which is also why the turkey industry has a relatively high rate of antibiotics usage.

Another big problem at turkey farms is the Histomonas parasite, which spreads blackhead disease. This disease can spread quickly and sometimes kills even up to half of all the turkeys at a farm. It infects the intestines and the liver of the turkey and because of a lack of oxygen, its head will finally become black. Unfortunately, there is no treatment for this disease yet. Not all turkeys die from it, but those who survive have to suffer for weeks. Until 2003 a substance called nifursol was added to turkey feed to prevent this disease but later it became known using nifursol poses health risks to humans and is therefore no longer allowed. However, as it was the only prevention method, blackhead disease outbreaks have unfortunately become quite common at turkey farms in recent years.

With transportation, we again see similarities with the way that chickens are treated. Turkeys are grabbed by their legs, thrown into crates (which can result in the birds’ fragile bones being broken), and loaded onto the back of a lorry, which sometimes contains up to two thousand birds. The birds will then travel in any weather condition, no matter how extreme, without food or water. As a result of such careless transportation, many thousands of turkeys die each year from the journey alone, with birds dying from heat exhaustion, freezing temperatures or from accidents during transport, to name just a few causes.

Upon arrival, the turkeys are taken from their crates and hung upside-down by their weak legs. As these birds can weigh anything from 5-28 kilos, this can cause the bird considerable pain. They will first be dragged through an electrified water bath which is supposed to render them unconscious, before having their throats sliced. In order for the turkeys to be stunned, rather than just electrocuted, the electricity must first pass through their brain, but as the birds have such large wings, it’s often the case that the wings make contact with the water first, which means that some turkeys aren’t fortunate enough to be stunned before having their necks cut. Furthermore, if the blade fails to cut the throat correctly, the turkeys are scalded alive in the tanks that are used to loosen their feathers prior to plucking. Research has identified two factors to reduce the danger of birds regaining consciousness as they bleed to death. Sufficient current should be used to induce a cardiac arrest and both carotid arteries in the neck (the main blood supply to the brain) must be severed to ensure that the turkeys die as quickly as possible. However, a number of slaughterhouses fail to regularly ensure both these factors are carried out. In addition, some turkeys are killed by having their necks dislocated. However, research has shown that this method doesn’t always have the desired effect and unconsciousness may not be instant.

Clearly, the production of turkey meat is horrible and does not really fit in with the peaceful idea of Christmas. So next time at Christmas (or any other time you plan to eat turkey), please consider having one of the many available turkey mock meats. There are even brands that feature ready-made stuffed turkey! And else there are always plenty of other things to eat that do not support a cruel industry.

EFSA (2011). “Scientific Opinion Concerning the Welfare of Animals during Transport”. Available at http://www.efsa.europa.eu/en/search/doc/1966.pdf [Accessed on 29 november 2017]