Coconuts are mostly produced in Southeast Asia but are consumed a lot of Europe and North America. Coconuts grow on coconut trees, a type of palm tree, and can only grow in tropical and subtropical climates. Coconuts and products made from coconuts like coconut milk are plant-based. After all, coconuts grow on trees and can be produced without the use of animals. However, unfortunately monkeys are often used to help harvest coconuts which means coconuts often aren’t vegan.

Why are monkeys used?

According to the National Primate Research Center of the University of Wisconsin, a macaque can harvest between 500 and 1000 coconuts per day, while humans can only get around 80 in a day. By using animals, a farmer can harvest coconuts much faster and also get a much bigger harvest. As monkeys don’t need to be paid wages, this also saves a lot of labour costs. According to the National Primate Research Center, sometimes half of a family’s income is earned by the labour of macaques. In addition, climbing up trees to harvest the coconuts is hard and risky work, so by letting monkeys do this work for them, farmers reduce their own risk of getting injured.

How are the monkeys treated?

The monkeys, mostly macaques, are especially trained for their work and there are even special training schools for this purpose. At the schools, macaques are taught how to harvest the coconuts and how to select only ripe ones. The macaque are kept on a leash with an metal chain 24/7 and are often housed individually. This means they can’t behave naturally or have social contacts with members of their species. It’s also dangerous work for them with risk of injury and according to one trainer at a training school, the monkeys are sometimes forced to work and train so hard that they faint from exhaustion. After finishing their training, the macaques are sold for a lot of money to individual coconut farmers. This is an expensive investment, but as macaques usually live for around 40 years, the monkey can easily earn back this money over time.

While some monkeys at the training schools are born there, unfortunately many of them are captures from the wild. Often the mother monkeys are killed and the babies are taken to be trained from a young age to do this work. According to a macaque trainer from Thailand, the majority of the monkeys they train were caught in the wild, even though this is illegal. In Malaysia there are also training schools where farmers who already have a macaque can take them temporarily to do a coconut picking course. In addition, there are also farmers who train their macaques themselves. 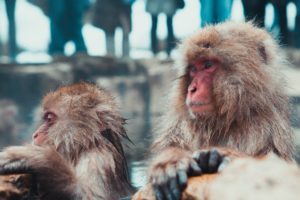 In recent years, the training schools have also become more popular as a tourist destination. It gives tourists an opportunity to see these animals close-by and to see them perform tricks. This is mostly done because the training schools can earn much more money this way, than by only training the macaques without opening up to tourists. According to wildlife experts this is against the animal protection laws in Thailand, but it still happens a lot. Some training schools are even said to be full time illegal mini zoos for tourists where animals are trained to do tricks, using the pretext of being a training school as a cover story.

How often are monkeys used?

Unfortunately, there are no precise statistics of how many monkeys are used to harvest coconuts or how prevalent this practice is. According to the Vegan Society, most brands they’ve approached say they use coconuts harvested by humans. However, the Vegan Society does not mention which or how many brands they’ve approached. According to Edwin Wiek, animal protector in Thailand, about 30 percent of coconuts in Southern Thailand are harvested by monkeys. According to a coconut industry insider from Thailand, 99 percent of coconuts in Thailand are harvested by monkeys. Also in Malaysia monkeys are used, and according to the Malaysian Animal Welfare Association, they can’t guarantee the monkeys well-being because of lack of oversight. Also in other Southeast Asian countries, such as Indonesia, India and Sri Lanka, it’s known that monkeys are used by coconut farmers but there are no exact numbers of how often this happens. As using monkeys for labour is legal in most Southeast Asian countries, no one keeps track of the prevalence of this practice. Therefore, while it is certain that this happens on a considerable scale, it’s not known how many monkeys are used. 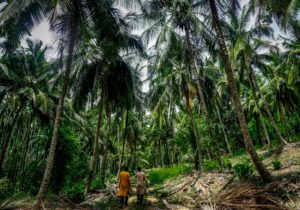 The growing demand for coconut products has led to an increase in coconut production in recent years. Unfortunately, this also has a negative impact on the environment. Deforestation is common to make space for new coconut farms. Deforestation is not only necessary to keep up with the growing demand, but also because coconut trees start to produce less coconuts after a while. That’s why farmers try to keep planting new trees, to keep up production. Nowadays it’s becoming more usual for coconut trees to be grown as mono cultures. According to researchers from Stanford, this has a great impact on the ecosystems of tropical islands. This changes the vegetation, which leads to certain animals leaving the area and in the end the entire ecosystem changes. For example, researchers found that sea birds leave areas with coconut palms because they can’t nest in these new trees. When they’ve left, the soil quality is greatly reduced as sea birds feces no longer adds nutrients to the soil. According to the Dutch Voedingscentrum (food advisory committee), coconuts have a medium to high climate impact, especially because of deforestation and the high usage of pesticides to prevent insect plagues. In addition, the water usage for growing coconuts is also quite high.

Coconut products are vegan when they are produced without using monkey labour. The problem is that it’s not mentioned on the package of a product whether this is the case and it’s hard if not impossible to find out whether a coconut product has been made without using monkeys. Below you can find a list of brands that say they don’t use monkeys for the harvesting of their coconuts. However, it’s unclear how reliable this list is, no brand admits that they use or could be using coconuts harvested by monkeys. In addition, many of the brands in the list use coconuts from Thailand, while someone from the Thai coconut industry said 99 percent of coconuts there are harvested by monkeys. Furthermore, most coconuts are grown by small farmers. It is therefore extremely hard and pretty much impossible for companies to be sure none of their many farmers keeps one or several monkeys. Therefore they mostly seem to rely on the farmer’s word and in most cases do not seem to have any policy specifically against their farmers using monkeys. However, as one in every twenty supermarket products contains a coconut derived ingredient, avoiding all coconut products can be difficult.

Companies that say their coconut products are not made with the help of monkey labour:

(Note: While these companies have themselves said that they do not use monkey labour, this is hard to check and enforce, and in addition most of these companies don’t have any official company statements or supplier requirements that specifically state that using monkey labour or other animal labour is forbidden. Therefore I’d like to note that there is no 100% guarantee that none of their suppliers uses monkey labour. However, if you do decide to consume coconut products, these companies are probably the best option)