Why going vegan is good for the environment

Maybe you’ve seen the news and heard that eating meat contributes to global warming, but actually, there are several reasons why going vegan is good for the environment. The production of animal products requires an enormous amount of resources, such as water, land, and feed. One of many consequences of keeping so many animals is the amount of pollution caused by their manure. This is happening on a mass scale and is having a huge impact on the environment.

A lot of water is needed

Producing meat and milk requires a lot of water.  It’s estimated that 20 -30 percent of all freshwater in the world is used for animal agriculture. In some countries, such as the US, 55 percent of all freshwater is used for animal agriculture! Not only do animals need water to drink, it’s needed to grow feed, clean the animals and farms in which they live, keep both the meat and milk cool, and clean the slaughterhouses. Perhaps it isn’t a surprise then, that roughly 2350 litres of water are needed to make just one hamburger! For a litre of milk, 1050 liters are needed. It’s difficult to see how it’s worth the cost, especially when you consider that it’s possible to make a soy burger with only 158 litres of water and a litre of soy milk with 297 litres of water. By switching to plant-based versions of the foods and drinks you enjoy, you can save vast amounts of water.

Maybe you’re wondering why it matters so much that we’re using so much water. Don’t we have enough water? Luckily, many countries do have a sufficient amount of water, but there are less fortunate regions on the planet where there are severe shortages. One-third of the world suffers from water scarcity, and it’s predicted that by 2050 that figure will rise to two-thirds. In these areas, the people often exploit aquifers that store water deep underground, but soon these underground oases will dry up. At the moment, there’s no sustainable solution for providing people in water scarce areas with a sufficient amount of water, so it’s important not to unnecessarily waste the water we have. Because animal feed is often imported from water-scarce countries, water absorbed by the plant is moved from a water scarce area to later get back into the water cycle in a completely different area of the world. So, eating meat, drinking milk or using animals in some other way contributes to the deteriorating water condition in dry countries.

A lot of land is needed

Besides water, you need a lot of land for farms and slaughterhouses. However, for making animal products, most land is needed for animal feed. Sometimes farm animals eat grass from pastures and plant left-overs 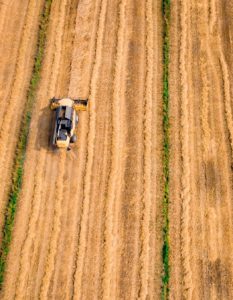 that humans don’t want to or can’t eat, but that is not enough to feed all 70 billion farm animals we keep for animal products. One-third of all agricultural land is used to grow the bulk of a farm animal’s diet: soy and corn. It would be far more resourceful to use this land to produce food for humans instead of growing animal feed, as it would require significantly less land to do so. To make one kilo of beef you need 4 to 7 kilos of feed, while we could also use these 4 to 7 kilos of plant-based food to feed humans. In addition, one-third of ALL the ice-free land on earth is occupied by animal agriculture (growing animal feed, factory farms etc), a huge amount of land that we could also use for other purposes. Researchers have calculated that if everyone were to go vegan, we’d need less agricultural land than we’re currently using. This would mean we’d no longer have to cut down rainforests to clear space for more land, but we could even give land back to nature, which would be much better for the environment.

Animal agriculture also causes other types of pollution. In many places, manure causes severe water pollution as it often ends up in rivers. Too much manure in water causes plants and animals living in the water to die until all that is left is algae. In some areas, this has already contributed to the disappearance of nature while some river and coastal areas are already devoid of life. Furthermore, antibiotics and harmful chemicals end up polluting water and natural environments through manure.

Another way in which animal agriculture causes pollution is the growing of animal feed. As mentioned earlier, a third of agricultural land is used to grow animal feed. Pesticides and herbicides are almost always used, which results in many harmful chemicals finding their way into the environment, harming plants and animals not only in the immediate vicinity but also in other areas as water carries the chemicals away. The pesticides and herbicides used in growing animal feed are usually more harmful than those used for growing food for humans. Genetically modified corn and soy are often used as animal feed and manipulated to withstand extremely harmful chemicals that kill all plants and animals around the corn/soy plant. These genetically modified plants are not grown to provide food for humans (at least not for humans in the EU), but it is used as animal feed almost everywhere else in the world.

So it’s clear that animal agriculture plays an important role in global warming, the reduction of biodiversity, the disappearance of nature and special eco-systems and the growing water scarcity and water pollution. Of course, there are indeed other causes of environmental problems, but if everyone were to go vegan it would go a long way to solving some of these issues. It’s much easier to replace a piece of meat or glass of milk with plant-based versions than to shower only once a year, sell your car or close all factories. Changing your diet is the easiest and most effective way to reduce the negative impact you’re having on the environment.

What is veganism? Why eating meat is irrational