Why you shouldn’t buy wool anymore

You’ve probably seen sheep standing in a field or perhaps you’ve even been to a traditional sheep shearing event. These things usually don’t seem that bad, which is why many people believe there is nothing wrong with using wool. We used to think that as well. Unfortunately, the production of wool turns out to be quite different from what most people imagine and it’s definitely not animal-friendly.

An important reason why many people have the wrong image of how wool is produced is because in most countries there is little if any wool production and most of the wool is imported. Especially in most European countries the majority of the sheep are being kept for meat, not for wool, so the sheep you see in a local field likely have nothing to do with wool clothes that are for sale in the same country.

The majority of the world’s wool production takes place in Australia (145 million sheep) and New Zealand (60 million sheep). Australia even produces 80% of merino wool, the type of wool that is mostly used for making clothes. Unfortunately the wool production in Australia is known to be particularly animal-unfriendly and cruel. In New Zealand, the United States and the United Kingdom, it isn’t much better. All the conditions and procedures mentioned in this blog happen in all four of these countries unless specified.

It differs per farm whether sheep are bred naturally or by artificial insemination, but in all countries artificial insemination of sheep is commonplace. This can cause problems as breeders often try to manipulate the process to create twins or triplets. While this naturally generates more income for them, it can be quite risky. First of all, it’s more risky for the mother and increases her chance of having a miscarriage. In addition, sheep only have two nipples, which means that a mother can only take care of two lambs. When a sheep gets more than two lambs, the third will not be accepted by the mother nor by other female sheep as they only look after their own young. This regularly results in the third sheep dying of hunger. While many sheep die of preventable causes as we shall see later, in addition 15 percent of lambs in the UK die in the first few weeks after being born.

In all wool producing countries, the male lambs are castrated within a few weeks of their birth. The most common way of doing this is by placing a rubber ring around the lamb’s testicles so the flow of blood is stopped. This causes the testicles to slowly die and fall off and therefore it doesn’t require any difficult medical procedure. However, this method is very painful and not exactly animal-friendly, especially as it’s done without stunning the lambs. At the same moment as the castration, all lambs (male and female) have their tails docked. This happens in a similar way to the castration; by putting a tight rubber ring around the tail that stops the blood and results in the tail falling off after about a week. Tail docking is also painful for lambs and is almost always done without any form of stunning or pain relief.

The reason tail docking is a normal procedure for all lambs is because many sheep are plagued by flies. Sheep that are bred for wool production have a particularly thick skin that gets dirty easily. Faeces and urine stick to the wool and become a breeding ground for flies, especially the breech of the sheep and its back legs. This causes the disease Myasis, where thousands of maggots hatch and begin to eat the sheep alive, causing huge wounds and a lot of pain. Because of this, sheep often try to bite themselves to get rid of these maggots, causing even more wounds. We advise you not to google this disease because the pictures you’ll find are disgusting. Myasis can even cause sheep to die. To limit the risk of this disease, the tail is docked as flies like to lay their eggs underneath the tail. However, 80 percent of all the sheep with a docked tail still suffer from Myasis, so docking tails does not solve this problem. Since 2007 tail docking is no longer allowed in the Netherlands as research shows that it doesn’t actually reduce the risk of sheep getting Myasis, but unfortunately in almost all other countries this is still a standard procedure. The only way to really prevent and treat this disease is by trimming the sheep’s wool and treating them with certain chemicals and medication, but these solutions are very expensive and time-consuming.

In Australia they use a different method to combat Myasis in a cheap way, called mulesing. This means that not only the tail is removed, but the entire skin around the back legs and buttock is cut away. This happens without any pain relief and as you can imagine, it’s extremely painful. There are barely any regulations for this procedure, so people doing it can decide by themselves how deep they cut and whether or not they treat the wounds afterwards. As this usually happens at the same time as the castration, it’s also common in Australia for the testicles to be cut off. Australia promised to ban mulesing from the start of 2010 after a lot of criticism from abroad, but is still yet to ban the practice. Every year another 10 million lambs undergo this painful procedure. Although mulesing does decrease the risk of Myasis, it doesn’t prevent it and many sheep in Australia still suffer from this disease. 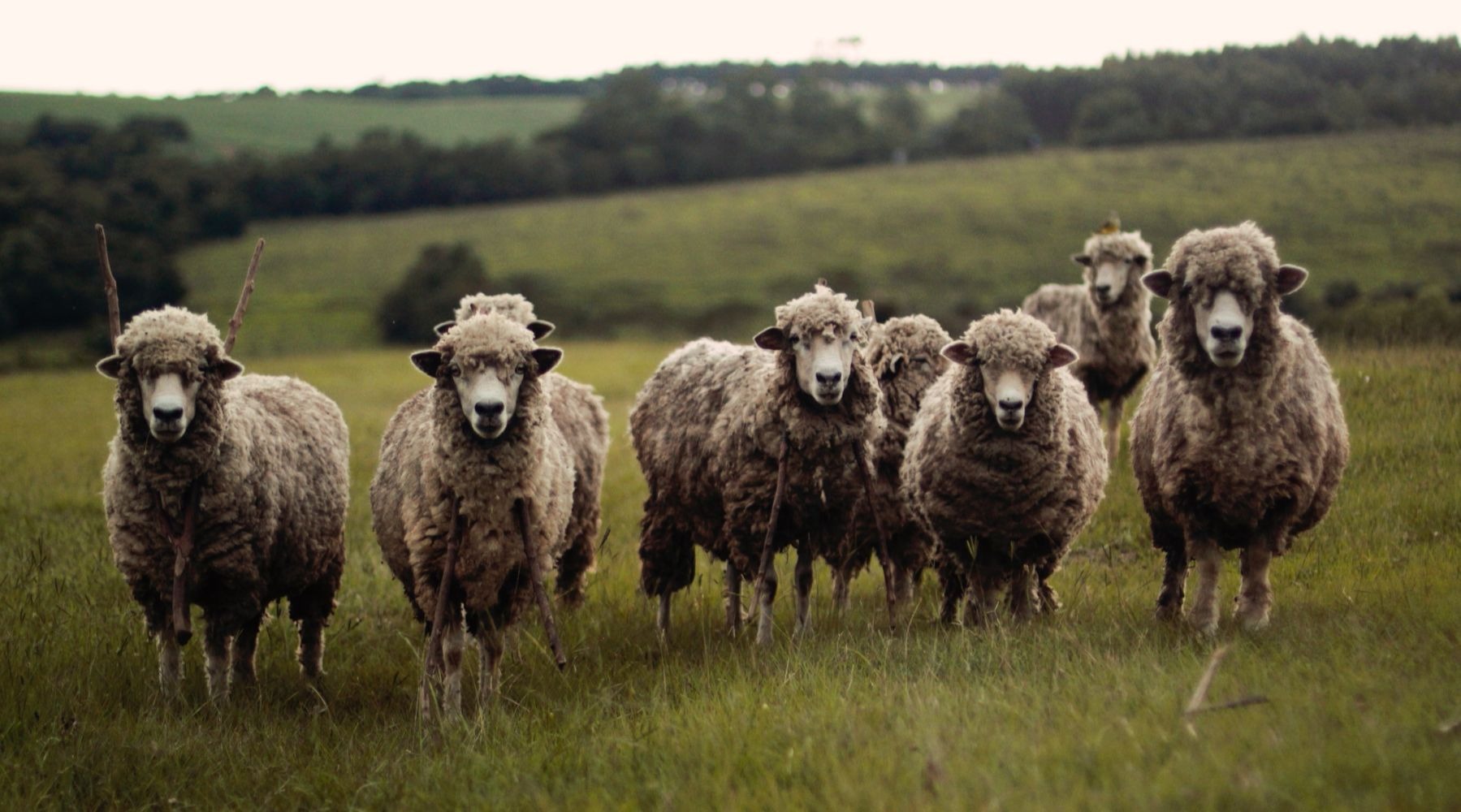 So-called sheep stations are pieces of land of up to thousands of square kilometers where sheeps are kept for wool production. As you can imagine with such huge companies, the owner is usually not the one looking after them. As caring for sheep isn’t a popular job, it’s usually done by young and temporary employees who are allowed to do this work without any qualifications. As they usually have to look after thousands of sheep in a huge area, it’s not surprising that diseases, wounds and deaths often go unnoticed or aren’t treated. For example, mastitis udder infection is a disease that often occurs among sheep and is easily treatable with antibiotics but unfortunately often left untreated. However, even smaller herds are no guarantee for better treatment. Research in the UK has shown that sheep herds in both England and Scotland are often neglected and sheep regularly go without the medical treatment they need, such as treatment for mastitis udder infection or wounds.

In the wild sheep don’t need to be sheared. They have enough wool to protect themselves against the elements. Their wool increases in winter and in the summer they slowly lose bits of wool so they can stay cool. Unfortunately, most sheep nowadays do need to be sheared. They are bred to have an unnatural amount of wool which they’re unable to shed. If they aren’t sheared they suffer from heat exhaustion in summer. The shearing can cause all sort of problems. Often sheep are sheared too early in spring, when it’s still cold outside and consequently die from the elements. In the UK alone, thousands of lambs die from this every year.

The shearing itself also isn’t animal-friendly. Shearers get paid per kilo of wool, so they have an incentive to shear as fast as possible. This often leads to wounds and it regularly happens that pieces of skin are sheared off. Only the worst wounds are treated without pain relief. It’s also common for shearers to use violence to keep sheep from moving around, beating and kicking them. Unfortunately these practices aren’t exceptions and are considered common practice. Youtube has dozens of videos of shearers from different countries severely abusing the animals while shearing them. Because of this, several shearers in Australia were taken to court and convicted of severe animal abuse. Unfortunately, the punishment was only that they can’t work as shearers anymore and had to pay a small fine, not exactly a punishment that’s going to deter other offenders.

As sheep get older, they begin to produce less wool. While in the wild a sheep’s average lifespan is 17 years, in the wool sector sheep are usually slaughtered when they’re about 4 to 6 years old. In Australia and New Zealand almost all sheep are shipped to the Middle East to be slaughtered there, but also part of the sheep from other countries, such as the UK, are shipped there. The sheep spend weeks in trucks and on ships, often getting little food and water, in extremely crowded conditions and exposed to the elements. Therefore it’s not surprising that many of them don’t survive the journey. In the Middle East they’re slaughtered without any form of stunning, bleeding to death fully conscious.

In some countries a considerable number of sheep are slaughtered in the country where they were raised. In the UK for example, every year 16 million sheep are slaughtered, many of them lambs. They’re stunned with an electric shock, but research has shown that this often does not stun the animal properly, meaning they die a very painful death.

Sometimes people think choosing products made from wool is a good choice, as it’s a ‘natural’ material and can be decomposed and is thus environmentally friendly. However, the production of wool is much more damaging to the environment than most other textiles. Producing wool requires enormous amounts of land and water. In addition, all the hundreds of millions of sheep put huge amounts of greenhouse gasses in the air. Furthermore, pesticides and chemicals are often used on sheeps to try keep them free from insects. These chemicals not only cause other animals to die, but they also pollute nature. In this way and through sheep manure, wool production also contributes considerably to water pollution. Lastly, many other species of animals are often hunted down in areas where sheep are kept, such as coyotes and wolves. In some countries the near extinction of certain species is partly caused by wool production. Therefore, there are many other textiles that are a much more sustainable and environmentally friendly choice.

Unfortunately, organic wool is not exactly a good alternative. The label ‘organic wool’ is not legally protected, meaning that wool with this label doesn’t have to be entirely produced in an organic way. Generally speaking, organic wool is often made by using natural feed, without mulesing, ‘slower shearing’ and the employees get a fair wage. However, many of these are hard to check and most of the cruel practices in wool production are still allowed. Luckily, there are many other types of textiles that can be made without animal suffering. Many other textiles and synthetic wool are just as warm, but without the cruelty and without being itchy. A much better option!