Why you shouldn’t eat honey

Honey is a thick, golden substance produced by bees. Honeybees spend the months prior to winter gathering nectar from flowers which will later be turned into honey. Plants use nectar to attract bees and other insects. When the bee stops at the plant to gather the sugary fluid, it transfers pollen grains collected from other flowers, and thus pollinates the flower. The bee uses its long, tube-shaped tongue to extract the nectar which is then stored in the bee’s honey stomach, also known as crop. When the fluid enters the bee’s crop, an enzyme that’s made by the bee’s body is added to it. This enzyme changes the composition and pH, which turns it into honey and helps preserve the nectar. Once the bee has enough nectar – this takes a while, as the bee will visit up to 1500 flowers before its stomach is full – the bee returns to the hive, where it passes the nectar to another bee by regurgitating it into the other bee’s mouth. This process of regurgitation continues until the nectar reaches the bee closest to the honeycomb, where the last bee deposits the liquid into the comb. Inside the comb, the honey is still very much a liquid – not like the thick honey you add to your pancakes. Bees then fan the honeycomb with their wings to help evaporate any excess water from the nectar. When most of the water has evaporated, the comb is sealed with a liquid that’s produced in the abdomen of the bee, which eventually hardens into beeswax. The honey is then preserved until the winter and will serve as their food source.

Of course, bees aren’t just generous insects that deliver their excess honey for humans to use. While many people imagine their honey comes from a lovely garden with a few beehives in it, the majority of all honey being produced comes from factory farms that usually have at least 300 hives each. In these farms, bees are raised so that we can take their honey when it’s ready to be harvested. When farmers remove honey from the hive for human consumption, they replace it with a sugar substitute. Unfortunately, this replacement is inadequate, as it lacks the vital nutrients, fats and vitamins bees require to be healthy. Bees then work tirelessly to replace the missing honey, exhausting themselves in the process. This means that many bees won’t survive the winter because of exhaustion and lack of nutrition. Therefore, many commercial beekeepers just kill their bees at the end of the summer, as they know they’ll have to replace them with new bees the next year anyway. Furthermore, countless bees die even sooner, after stinging the farmer during the removal of the honey.

The fact that most of the bees that make honey will die when we take it from them should be enough of a reason to never consume honey again. However, the cruelty towards bees doesn’t end there. Even for the bees that don’t die of malnutrition, life certainly isn’t pleasant. Most bees are bred by breeders who sell them to beekeepers. The bees are then transported to the beekeepers, usually in crates. Bees can be shipped thousands of miles away in these crates and research indicates that bees subjected to such lengthy travel have trouble fully developing their food glands and do a poorer job in nursing the next generation of bees. In addition, queen bees are often replaced (more on this further down) and are then often mailed to the beekeepers in small mail order packages. This means they’re often handled roughly, can take days to arrive and are completely exposed to all weather conditions.

Most beekeepers replace their bees every year and therefore have to buy new bees from breeders. In the last few years, some breeders have begun to use artificial insemination to speed up the breeding process. In nature when bees mate, the male bee dies. While male bees die anyway during reproduction, the way they die when they’re used for artificial insemination is somewhat crueler. The head of the male bee is squashed or pulled off, which causes the nervous system to create a sexual reaction. The bottom of the male’s body is then squeezed to collect its semen. Queen bees are then anesthetised with carbon dioxide and injected with the semen of several decapitated bees by using a syringe. As you can probably imagine, this whole process is not pleasant for either the male or female bee. 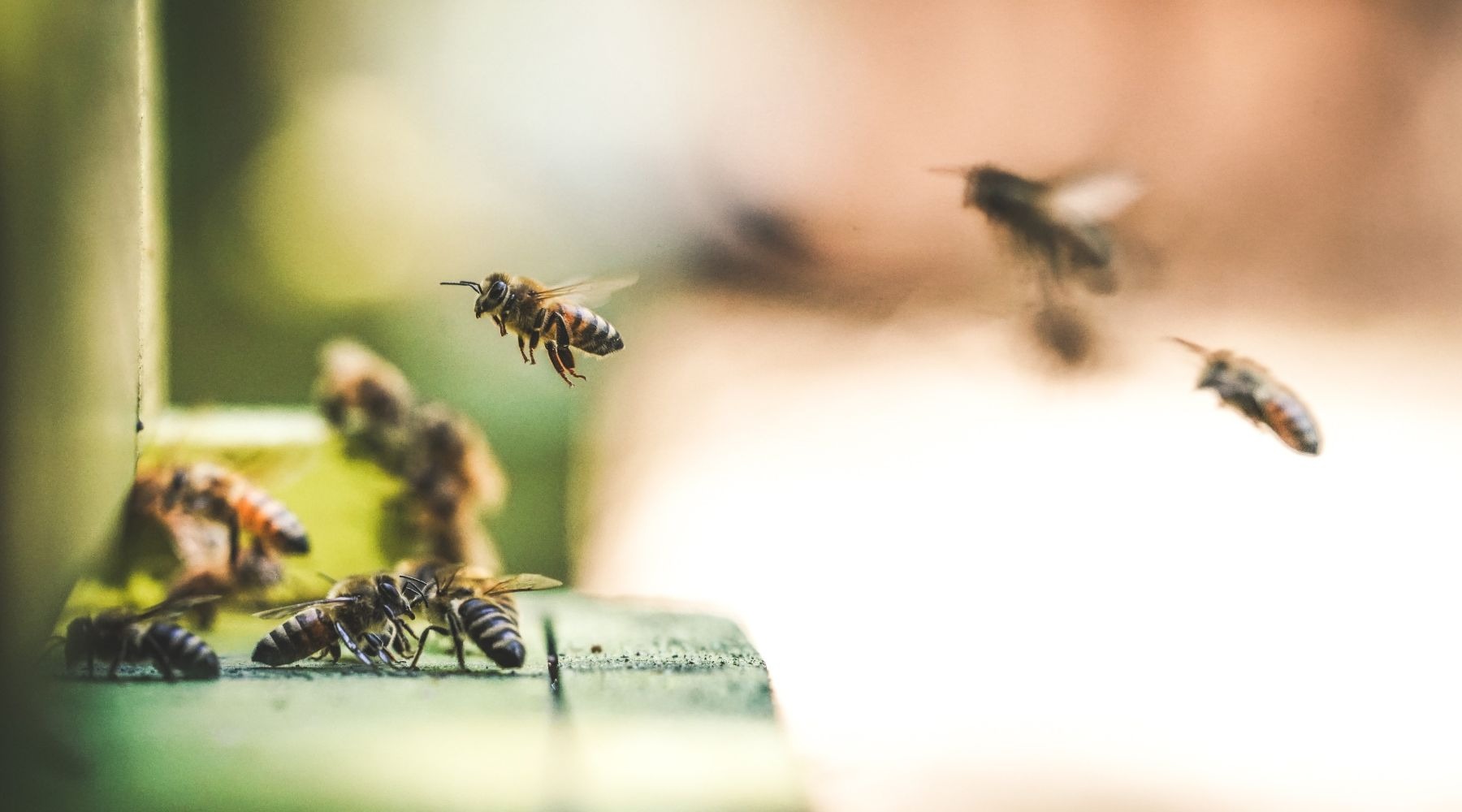 Keeping the bees under control

In order to keep control over the bees, beekeepers use several unfriendly techniques. For example, to prevent (part of) the bees eventually leaving and settling elsewhere (as is the natural way for bee populations to spread), beekeepers clip the wings of the queen to prevent her from going anywhere. As bees won’t go anywhere without their queen, this also keeps the bees nearby.  Normally, a new queen would be born and she’d take part of the population with her. To prevent the bees from dividing into various groups, beekeepers usually kill their queen every year or two and replace her with a new queen to prevent the bees from rearing a new queen themselves. Other beekeepers choose to clip off some of the queen’s legs, as this mutilation will prevent her to lay eggs properly and the other bees will rear a new queen to replace this severely disabled queen, therefore saving the beekeeper the effort of killing the queen and ordering a new one.

Another bee-unfriendly practice is using smoke to calm the bees when the beekeeper approaches the hive to take the honey or for some other reason. When noticing the smoke, bees think there’s a fire and automatically respond as they would if there were a real fire. They rush to fill their bodies with as much honey as they can, as they assume their hive will have to be abandoned any moment. As the bee’s belly swells from all the honey inside them, it makes it more difficult for them to sting. In addition, bees release pheromones (chemicals) in the air to warn other bees in case of an emergency, which often results in the rest of the bees acting aggressively and defensively. Because of the smoke, the pheromones are masked so the bees won’t be as aggressive as they usually would, which stops them from stinging the beekeeper.

Another problem with human interference with bees is that they can get overheated. When it’s quite warm outside, bees keep their beehive cool by bringing in water and by circulating the air with their wings in an efficient and cooling way. When the beehive is moved in the wrong way or when they feel threatened, it can become too hot in the beehive, causing bees to die.

The breeding on honeybees has huge consequences on insects and birds competing for nectar. As the amount of farmed bees is increasing, the number of native bees and various bird species is decreasing. In addition, most honey comes from abroad (for example 90% of the honey in the UK is imported), mostly from countries like Turkey and China. As this honey has to be transported over great distances it causes a lot of pollution.

However, the biggest environmental problem is that species of bees are either now extinct or endangered, and this includes the bumblebee and the honeybee. In 2012 40% of bee species were close to extinction. Bees play a huge role in pollination, as they are responsible for the pollination of 90% of wild plant species and 75% of agricultural crops. Bees pollinate not only fruits and vegetables, but also products like cocoa and coffee. Therefore, their endangerment could be a big problem for plant diversity and even food security in the long run. A major reason for bee endangerment is the extensive use of pesticides. A recent study revealed that 75% of all honey around the world contained traces of pesticides, so clearly many bees encounter these chemicals, even if the amount is not enough always enough to kill them. Another problem is that the world has become increasingly unsuitable for bees. The practice of monoculture in agriculture, fields with nothing but grass and gardens with barely any flowers mean that more and more areas become places where bees struggle to survive as they need to be able to find enough food within a few hundred meters from their hive. Wild bees have to compete with honeybees for food, so keeping honeybees for honey also contributes to the endangerment and extinction of wild bee species.

There are various reasons why it’s better not to consume honey. While most people are not aware of the cruelty behind honey production, many people are also not aware of the fact that most honey is extremely unhealthy, even more unhealthy than sugar and sugar alternatives. The honey in all supermarkets and in most other shops is not the same honey that bees put in their hives, as the honey is heated and processed in a factory. It’s heated so it can be preserved for a longer time (when heated high enough it can be preserved for a few thousand years), but when honey is heated, it loses most of its vitamins and minerals. In addition, almost all honey contains added sugars (and honey already consists of 80% sugar before processing).

It’s healthier and more animal and environmentally friendly to stop consuming honey. Luckily there’s a wide range of delicious honey alternatives available, such as golden syrup, agave syrup, maple syrup, molasses, and coconut nectar, to name just a few! All of these alternatives can be used to replace honey in any recipe so living without bees’ food is easy!

Mid-Atlantic Apiculture Research and Extension Consortium. “The Colony and Its Organization” https://agdev.anr.udel.edu/maarec/honey-bee-biology/the-colony-and-its-organization/

Why eating meat is irrational The true cost of eggs